← Back to Archives
Cleveland Launcher HB Turbo Driver: If you like ‘em long and straight 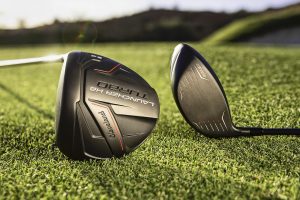 Past Cleveland Launcher Driver models featured a fairly pronounced draw bias. For players like me, who struggle with a hook, this feature was disappointing. Ever since Cleveland reintroduced woods and irons a couple years ago, I’ve been eager to test their new drivers. In the past, I have found Cleveland’s long clubs to be consistently solid performers.

So when Cleveland announced the introduction of the new Launcher HB Turbo Driver ($350) just a couple months ago—from which they removed the draw bias—I was beyond eager to get my hands on one.

After 8 rounds with the Launcher HB Turbo in my bag, it is clear that it won’t be coming back out of my bag any time soon, as I have grown very fond of long, straight drives.

Cleveland’s press release touts a number of design innovations in the Launcher HB Turbo. The first of these is a Turbocharged Cup Face. This means the titanium is stretched around the edges of the clubhead, and the face itself has variable thicknesses to increase COR and enlarge the sweetspot. Cup faces also increase the gear effect, meaning that off-center contact tends to try to work the ball back to the centerline.

Next are a number of features all aimed at shifting the center of gravity lower and farther back in the clubhead. The HiBore crown, most noticeable for its raised air-channeling ridges, allows weight to be moved from the top of the clubhead. Same goes for the Ultralight Hosel. The custom Miyazaki C. Kua shaft also relocates weight toward the grip end, making the head feel lighter despite added mass—a sort of natural counter-balancing scheme.

Because of the lower, deeper center of gravity, I went with a 9-degree Launcher HB Turbo with a stiff shaft, rather than my normal 10.5-degree loft. And the result of all the engineering innovations is a driver that, as the name portends, launches the ball high, straight, and very far. Most golfers I know are pretty fond of that combination.

In all seriousness, I have hit more shots with this driver that felt like they were going to drift off right or left that instead worked their way back toward the fairway than with any driver in recent memory. Feel is exquisite, too. Even though off-center shots still often turn out pretty well, I can feel the difference between them and center contact. And center contact is very pure and rock solid.

During my second round with the Launcher HB Turbo, I striped a long drive down the middle of a tree-lined fairway, and turned to my son and said, “It has been a long time since I’ve felt confident with a driver.”

I must admit: It feels good.

Cleveland’s Launcher line has evolved from primarily game-improvement clubs to clubs suitable for mid- or even low-handicappers who want extra distance and added control. Players who prefer a low ball flight or really like to move their drives in arcing fades or draws might not find quite what they’re looking for. But if you enjoy long, high, straight drives, the new Cleveland launcher HB Turbo delivers.