In 1995, I was living in Japan. If you think the 1990s golf craze was at a fever pitch in the US, you should have seen Japan. People were spending millions on private club memberships. And every time I ventured into a department store, I’d check out the golf clubs, where I could always find drivers ranging in price from $500 up to over $1000. (Yes, US dollars, not yen.)

One of the equipment companies I first encountered there was XXIO – their sticks were simply gorgeous, and, to be honest, at the top of those price ranges.

Fast-forward to today, as XXIO, now part of an expansive Cleveland/Srixon/XXIO consortium, maintains its boutique status in Japan and enters the US market in force. XXIO’s first full line introduction to US golfers is the XXIO Prime line: ultra-light irons, hybrids, and woods aimed at players with moderate swing speeds who are looking for increased distance throughout their bags. 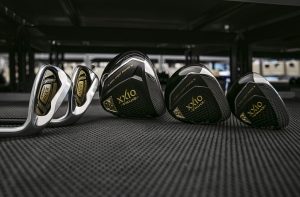 The XXIO Prime line is not for every golfer; irons are fitted only with graphite shafts, and all shafts throughout the set are only available in regular flex (XXIO Prime SP-1000 by DST), which may feel pretty whippy to someone who normally plays stiff shafts (like me).

Another feature that narrows the target market is the price tag: Irons go for $260 each, hybrids for $380, fairway woods for $580, and the driver tops the list at $850. So if you think XXIO Prime sound like the right clubs for you, it would be wise to demo them carefully to ensure that your investment will pay off.

How do these precious sticks play, you ask?

I received the XXIO H5 Hybrid, which has a loft of 23 degrees. This loft is the same as my normal 4-iron hybrid, so I was interested to compare the two head to head.

Before even hitting a ball, the relative flexibility of the shaft made it clear that I would need to slow down and smooth out my swing if I was to avoid hooking the XXIO Hybrid. This is not an easy task for me, but it is certainly a desirable goal in general, with all my clubs.

Once I had hit a few balls, it also became clear that the forged maraging steel cup face is hot – very hot. The ball just springs off the face. And, thanks to a flashy gold-colored tungsten weight deep in the sole of the clubhead, shots launch extremely high and land soft as a butterfly with sore feet, as my late brother-in-law used to say. Whereas my usual 23-degree hybrid has a piercing ball flight, the XXIO produces a ball flight more akin to that of an 8-iron, but without sacrificing distance.

Let me illustrate this performance with one of the best shots I’ve ever hit on the 18th hole of my home course, Lake of the Woods Golf Course (Mahomet, IL). After smother-hooking a(nother) drive into the fairway, I had 202 yards uphill, into a cool wind, to a front pin tucked behind a greenside bunker. I figured I’d give the XXIO Prime a real test and went for it. Mindful to keep my swing smooth (well, as smooth as I’m capable of, which for most players would instead be described as “spasmodic”), I pured it, and the ball never left the flagstick. As I got up to the green, and tried to control my breathing (walking is always a workout early in the season), I found my ball 18 inches directly below the hole, about a foot ahead of its ball mark. That was my first birdie of the season, in fact.

If I were guaranteed results like that – or at least assured of consistent results of this sort – the XXIO Prime price tags would not seem quite so prohibitive.

Bottom line: If you’re looking for clubs that will generate lightweight power, and you have a little extra disposable income to invest, don’t pass XXIO over just because you may not have heard of them before. There are a lot of XXIO devotees in Japan, and they know their golf.