← Back to Archives
Bay Harbor Golf Club: Top of the mitten, top of the Michigan must-play list

The 1990s were heady times for golf in Michigan. I lived in The Great Lakes State from 1996-2002 and recall a year or two when one new course was opening every week during the summer months. This was still before the terms “destination golf” or “bucket-list course” had been coined, but the volume and quality of golf in the state was probably the best-kept secret in the sport.

In the early 1990s, the Boyne Resorts – Boyne Highlands, Boyne Mountain, and The Inn at Bay Harbor – were also booming, and building courses at all their properties. The crown jewel of this collection, Bay Harbor Golf Club, opened in 1996 with the goal of becoming the Pebble Beach of the Midwest. Golf Course architect Arthur Hills crafted 27 holes through the woods and along the shores of Lake Michigan, creating arguably the first true “golf destination” in the Midwest.

The “top of the mitten” – i.e., the northern tip of Michigan’s lower peninsula – is stunningly beautiful: breathtaking views of Lake Michigan, deep harbors and tranquil bays, soaring forests, a patchwork of inland lakes and rivers. Although summers, and golf seasons, are relatively short, the summer days are temperate and long, allowing golfers to play 14 hours a day during the height of the summer.

What better setting, then, for Arthur Hills to carve 27 unique holes into the bluffs overlooking the lake, centerpiece to the tawny enclave of Bay Harbor? This is the layout that would cement his reputation for scenic yet difficult courses, replete with forced carries and heroic shot opportunities. The location is so picturesque, in fact, that an episode of “Shell’s Wide World of Golf” was filmed here shortly after the course opened.

Bay Harbor Golf Club consists of three 9-hole courses: The Preserve, The Links, and The Quarry. All three are immaculately groomed and exquisitely challenging, but The Links and The Quarry comprise the “premier” 18-hole experience. All three 9s have seven(!) tee boxes, allowing players to calibrate the yardage to their skill level. From the back tees, the Links/Quarry combination stretches to over 6,800 yards. From the most forward tees, players are looking at just over 4,100 yards.

No matter the tees you choose, you’ll be treated to spectacular vistas and holes routed brilliantly through woods and grasslands, and across ravines and a massive old shale quarry, all skirting the shore of Lake Michigan.

Assistant Golf Professional Scott Puschi offers a few valuable tidbits of advice for first-time visitors. “First, download the free GPS app onto your phone,” he says. “It’s a 3D yardage book with tons of helpful tips and flyovers of every hole.”

“Second,” he continues, “Play the Links and Quarry combination, unless you don’t enjoy forced carries. The Quarry has a forced carry on every hole, and we don’t want people to have a bad day.”

My 15-year-old son and I played the Links/Quarry combination in “Chamber of Commerce” weather. We chose to play at about 6,300 yards, as our games were undergoing various changes after some recent lessons. As we approached the tee box on the ~400yd 1st hole of The Links, my son started to realize why I was so excited to finally play Bay Harbor – and to understand why I am such a huge fan of Michigan golf. The panoramic view from the saddleback fairway down to the first green was just a taste of what was to come.

The approach on the par-4 1st Hole of The Links at Bay Harbor Golf Club is a taste of what’s to come.

By the time we got to the 3rd hole, possibly the hardest short(ish) par-4 you’ve ever seen, he just kept saying, “Wow.” That’s about as much outward awe you can coax out of a teenager. Nearly every green on The Links seems to be framed or back-dropped by the lake. The short (depending on the tees you play, 178-80 yards) par-3 4th is one of the best one-shotters I’ve seen in a long time, with certain death left and long, and a bailout area to the right that leaves a nearly unstoppable downhill chip toward the lake.

The vista from the tee boxes on the 3rd Hole of The Links is so gorgeous, you almost forget there’s a golf hole to play. 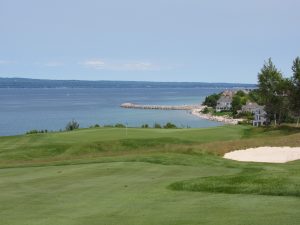 The approach on the 3rd Hole of The Links is a longer carry than the card says. 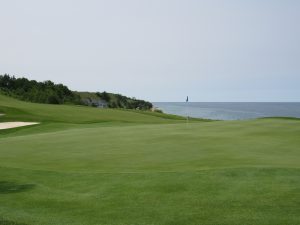 The shoreline of Lake Michigan is ever-present throughout The Links Nine at Bay Harbor. 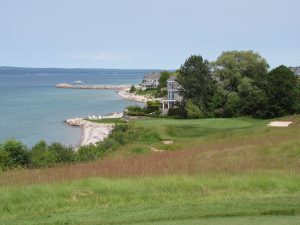 The par-3 4th Hole on The Links is one of the prettiest short par 3s you will ever play.

There’s only one forced carry on The Links at the par-4 6th hole, which is to a split fairway (take the right side—it’s much shorter!). The Bay Harbor app comes in very handy over the last few holes of The Links, especially for the blind landing area on the short par-5 7th hole and the serpentine par-5 9th, which snakes through wetlands from tee to green (stay left!). 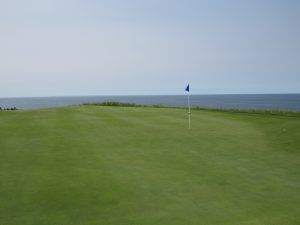 Yet another “infinity green” awaits at the par-5 7th Hole on The Links at Bay Harbor. 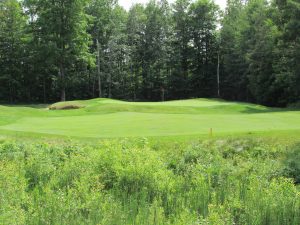 The Quarry turns inland at first, before swerving back out to the lake shore for its finish (Hole 1).

As it turns out, The Links, for all its challenges—and there are many—serves as but a warm-up for The Quarry, which requires precision and power on basically very shot. Looking through my notes, I find multiple uses of the words “insane” and “crazy,” but in good ways. For example, the brawny par-5 3rd hole first requires a long carry off the tee to a fairway bordered by a marsh to the right and an enormous waste area to the left. Your second shot will likely be a lay-up to a blind landing area, followed by an approach over a sizeable portion of the old quarry.

At this point, my son decided he was fonder of The Links. “This side is WAY harder,” he noted rather glumly as we counted up his strokes on the 3rd and penciled in a “10.” 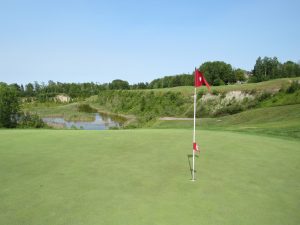 By the time you reach the green at the par-5 3rd Hole, you will feel the challenge of The Quarry.

The shorter but no less crazy par-5 5th hole was equally daunting, with a forced carry from the tee of about 220 yards over water, even from the middle tees, followed by another blind lay-up (aim toward the tall birdhouse). Heed the app and choose your club wisely, as the fairway ends at the water’s edge, water which surrounds the quarry-framed green. 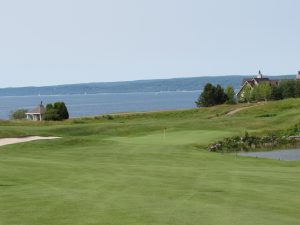 The green of the long par-4 4th Hole of The Quarry is tiny and fraught with danger. 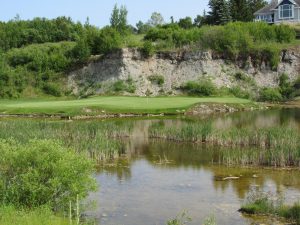 Any approach missing the green at the par-5 5th of The Quarry ends up in, well, the quarry.

More challenging carries follow on the brutish par-4 7th (stay right off the tee for a shorter carry), and the gorgeous yet beastly par-3 8th, whose wide, shallow green felt nearly impossible to hit (utilize the drop areas rather than pumping ball after ball into the abyss). 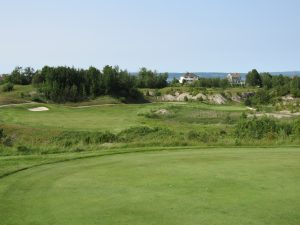 The short par-4 6th Hole demands that you get your yardages right, as hazards lurk in all directions. 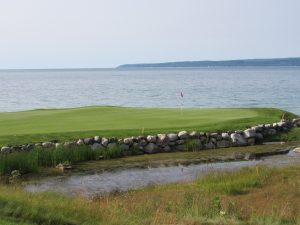 The wide, shallow green of the par-3 8th on The Quarry might feel almost impossible to hit.

The app is also handy on the par-4 9th, where the drive is blind over a humpbacked fairway that ends around 280 yards from the tee. My son’s drive went too long and was lost (greatly disappointing after such a good poke!), whereas mine stayed inches from trouble. From there, I had 110 yards downhill, over a ravine to an idyllic green nestled between the clubhouse and the crystal blue lake. One of the best shots of my life nearly found the cup, leaving me with a 4-inch tap-in for birdie and applause from the clubhouse veranda. 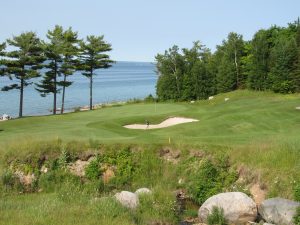 Stick your approach at the par-4 9th Hole of The Quarry and bask in the echoing applause from the clubhouse above.

Even my usually nonplussed teenager was duly impressed.

Before Whistling Straits, before Arcadia Bluffs, before Sand Valley, before The Pete Dye Course at French Lick Resort, there was Bay Harbor Golf Club, the original “bucket-list” course of the Midwest. Bay Harbor, and the rest of the Boyne Golf courses, were among the originals in what was to become a peerless collection of Northern Michigan golf destinations, which are still arguably the best-kept secret in golf.

Bay Harbor’s rack rate greens fee of $340 is not necessarily budget-friendly; however, advanced tee times online can be found for as little as $140, and guests at the stately Inn at Bay Harbor (as well as other Boyne properties) enjoy a wide range of stay-and-play package rates. Although the golf season in Northern Michigan only runs from May 1 to the 2nd week in October, the weather and daylight throughout much of it are almost magical.

Like my son, you will find yourself saying “Wow!” over and over again, as you check Bay Harbor Golf Club off your bucket list.