← Back to Archives
Stoatin Brae at Gull Lake View Resort in Augusta, Michigan: One of the best in the nation

The year was 1963. Darl Scott, the golf course superintendent at Gull Lake Country Club in Kalamazoo, Michigan, decided to build his own public access course, the West Course at what would grow to become Gull Lake View Resort. Over the ensuing decade, the Scott family would build their East Course, followed by the Stonehedge North and South courses. In 1988, the family bought the popular William Mitchell designed Bedford Valley, site of multiple Michigan Opens.

Despite the collection of outstanding courses already comprising Gull Lake View, in 2018, the Scott family collaborated with Renaissance Golf Design (Tom Doak’s design company) and its panel of senior associates, Brian Schneider, Eric Iverson, Don Placek, and Brian Slawnik. The result is Stoatin Brae – “Grand Hill” in Gaelic. The 6,742-yard, par-71 layout, located on a ridge of the highest land in Kalamazoo County, is indeed grand, and it is collecting national awards and “must-play” list designations like Meryl Streep collections Oscars. 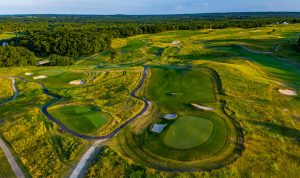 Gull Lake is situated in the Richland/Augusta area of southeastern Michigan. The lake is 1 mile wide by five miles long and is an angler’s dream, teaming with rainbow and lake trout, salmon, small mouth bass, and bluegills. It’s 16 miles from Kalamazoo, with two casinos (Firekeepers, Gun Lake) within 30 miles. This is all to say that there’s plenty to do, if you feel you need more than golf at Gull Lake View Resort’s six courses. During our visit, we saw dozens of groups—boys’ trips and couples—and to be honest, they all looked thoroughly golf-obsessed. After rounds on the links, they were tossing money down on the expansive putting greens in post-round contests. After that, they were sitting around firepits and on patios outside the dozens of well-appointed condos and houses enjoying cigars, bourbon, and tales of the day. Over dinner at the resort’s Charles and Darl’s Smokehouse (where the wings are some of the best I’ve ever eaten), my 17-year-old son and I overheard one group talking about their 54-hole day. We were sore after 36, but I think several rounds of drinks had soothed their muscles. Witnessing two days of the camaraderie and joie de golf vivre all around us, my son said, “This is the perfect place for a group of friends. I hope I have a bunch of friends who like to golf when I get older.” Me too, son, me too. 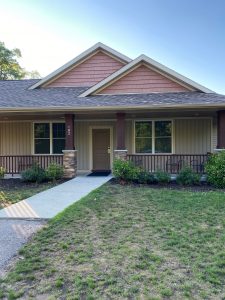 As described already, Gull Lake View Golf Resort is a family affair, and the family did an outstanding job routing Stonehedge South and North through the rolling, wooded landscape. Both courses have an authentic “Northern Michigan” feel, despite being in the southern third of the state. There are towering pines and hardwoods and dizzying elevation changes. The “stonehedge” moniker derives from the stone walls that snake through both South and North courses, from which players (thankfully) receive a free drop by local rule.

Stonehedge South has the trickier and slicker of the greens – there’s a steep learning curve. The breaks are very subtle, mixed in with some dramatic undulations. I failed to make a putt outside 4 feet until the 435-yard, par-4 18th hole, where I finally sank a birdie putt that made me eager for my afternoon round on the North. The South plays between 5,087 and 6,628 yards with five sets of tee boxes. Although there is OB on several holes (e.g., 1-5), choosing the correct set of tees will keep you out of most of the trouble. The stretch from the 490-yard, S-shaped par-5 7th through the 374-yard 15th might be the most enjoyable stretch. The second shot on the 7th is blind, and the green is tucked behind two massive bunkers if you want to go for it in two. The 396-yard 11th and 321-yard 12th both play down into a valley and then substantially back uphill to the greens. Neither my son nor I could do better than bogey on either hole, yet my notes still say, “So much fun!” It is indeed the mark of a good course if you can have fun playing it even when you’re struggling. 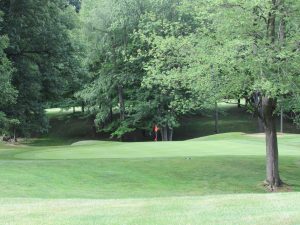 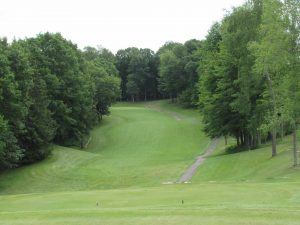 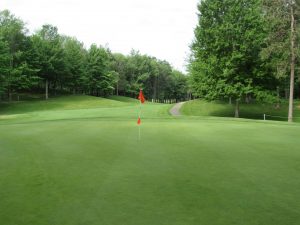 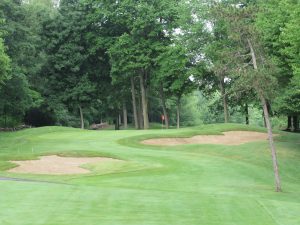 Stonehedge North stretches from 4,991 yards up to 6,712 yards, and although its slope and course rating would suggest that it is harder than the South, both my son and I played it better (my son carded his first sub-80 score, in fact—a 77). Maybe we were just warmed up? The routing here is also quite expert, with three par 3s, 4s, and 5s per side – why don’t more courses do this? – so there are more chances to impress with both length and variety. The par 3s are especially varied, ranging at the tips from 207 yards (8th) to 157 yards (11th). The 173-yard 17th is maybe the most memorable, though, with about a 50-foot drop over fescue and bunkers to a steeply back-to-front canted green—Pure Michigan golf. The North Course offers a peaceful, seamless set of holes ranging from thick woods to open grasslands. There’s a “tasteful” smattering of water throughout, mostly on approaches and around greens, along with prudent bunkering. Modern-day architects would be wise to follow the Scott family lead and consider more grass bunkers as cheaper alternatives to sand bunkers. 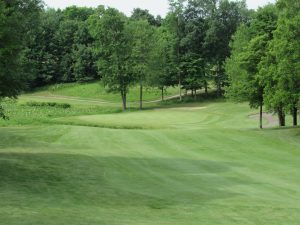 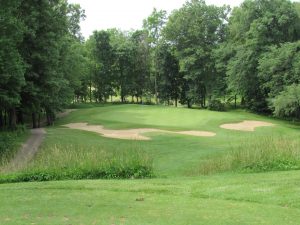 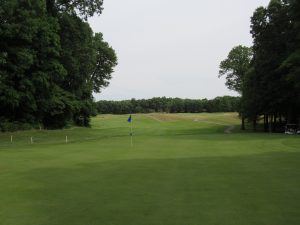 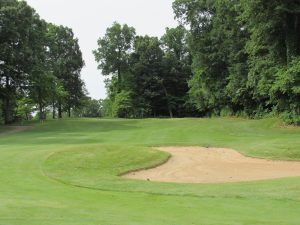 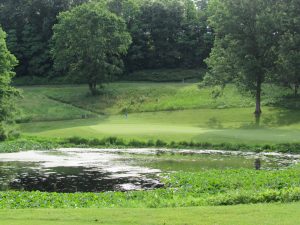 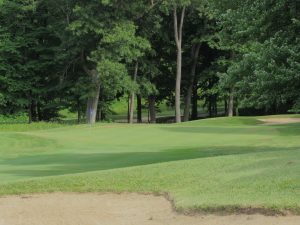 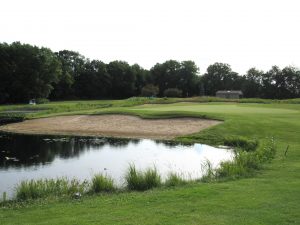 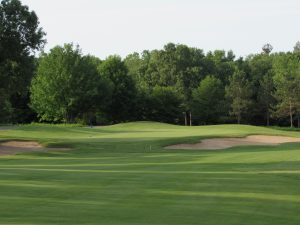 Renaissance Golf created a real beauty atop the highest point in Kalamazoo County. Ranging from 4,943 to 6,742 yards and at par 71, Stoatin Brae is grand indeed. There is not a tree on the course proper, just around the edges. With its heavily-fescued, windswept conditions, it feels a bit like The Loop at Forest Dunes, another Renaissance Golf creation. And, given the layout’s lofty perch above the Kalamazoo bottomland, Stoatin Brae also recalls echoes of The Pete Dye Course at French Lick Resort in Indiana. This said, Stoatin Brae is a bit more refined than The Loop and much, much less expensive than The Dye Course. 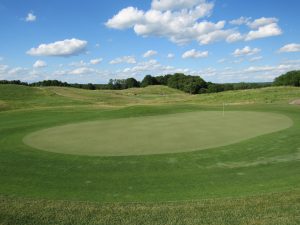 13th green on Stoatin Brae with several other holes fanning out across the hill behind.

Stoatin Brae opened fully in 2017 to rave reviews. It’s made the “Top 100 You Can Play” lists in both GolfWeek and Golf Magazine. As Bill Johnson, Gull Lake View General Manager describes construction, “We didn’t move hardly any earth here. The idea was to just set the course on top of the hill.” Indeed, the minimalist design takes full advantage of the firm, well-drained, sandy soil atop the hill, along with the constant winds. The greens are slower than on the Stonehedge courses, but they also tend to be crowned and firm, which tests your chipping game. Angles are the key into these greens, and staying below the hole will pay off in the end. The first two holes, a 359-yard par 4 and a 225-yard par 3, don’t have a single sand bunker between them. Distances between greens and tees are short, and like all great Scottish links, the course is extremely walkable, with a routing that affords multiple passes near “The Bunker,” the poured concrete hallway house built into the side of a hill. 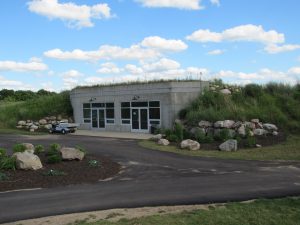 “The Bunker” on Stoatin Brae

Stoatin Brae crescendos on the back side, where one hole after another offers downhill shots, uphill shots, blind shots, birdie opps, and bogey threats one after another. The 548-yard closer is one of the most fun I’ve played in a while, with a narrow fairway snaking through the fescue to a turtle-back green. As evidence of how the wind and angles affect play, consider that I just missed birdie on 18 the first time out, but triple-bogeyed it the second time – and frankly, I felt like I didn’t play it much worse the second day. 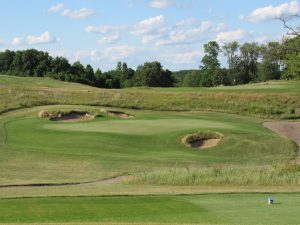 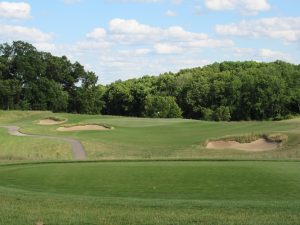 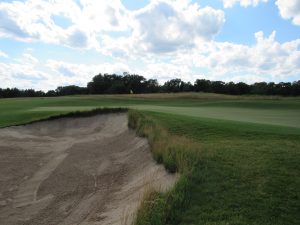 Despite the love Stoatin Brae has received from golf media, it and Gull Lake View Resort are still sort of a “sleeper” destination in golf-rich Michigan. Chicago-land golfers can be hammering drives at Gull Lake View in less than four hours, and hammering BBQ and beers at Charles and Darl’s four hours after stepping onto the first tee. Johnson notes some big plans for the panoramic site of Stoatin Brae including an expanded wedding and event venue and larger practice range. And in what might be one of the best membership deals in all of golf, members can play all six resort courses with one membership. When my son and I heard this, he turned to me and asked, “Why don’t we live here?” And I have to admit, I asked myself the same question.