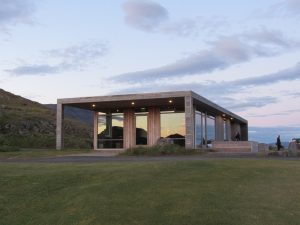 The clubhouse at Brautarholt Golf Course outside of Reykjavik, 2 a.m. on the Summer Solstice

It was 9:30 p.m., June 21—Summer Solstice, 2019—when Gunnar Pálsson picked me up at Hotel Frón in Reykjavik. Soon joining us in the Brautarholt Golf Course shuttle were four test pilots from Phoenix and a couple from outside Toronto. We were all heading to the course to play a round of golf under Iceland’s never-setting Midnight Sun.

“This is a bucket list experience,” said the woman from Ontario. “I’ve been planning this since October last year.”

“We decided to do it last night,” said one of the test pilots, clearly more comfortable flying by the seat of their pants, as it were.

If you’ve never thought about golf in Iceland, you wouldn’t be alone. You also wouldn’t be from Iceland. In fact, there are some 65 golf courses in Iceland, according to Gunnar, including the Golf Club of Reykjavik, which has over 3,000 members, making it one of the largest golf clubs in Europe.

“But what sort of season do you have here?” I ask Gunnar, exposing the depths of my ignorance about golf in Iceland.

“At Brautarholt, because we are on the coast, we usually open on the first of May and close at the end of October,” he says to my obvious surprise. That season’s not so different from some of the fabulous courses in northern sates like Minnesota, Wisconsin, or Michigan.

When the shuttle pulls into the gravel Brautarholt car park, we see what Gunnar means by “on the coast”: the North Atlantic is literally a driver and a mid-iron from the first tee (driver, 7-iron to be exact – trust me, I know, though I wasn’t trying).

Brautarholt Golf Course opened its first 9 holes in 2012, with three more opening last year. “We have 12 holes so far,” explained Gunnar in the shuttle, “with plans for 18 and land for 36.”

Out on the course, Gunnar provided a bit more history: “Before the financial crash in 2008, my brother-in-law was bought out of two businesses. Then the crash came and prices fell. He said, ‘When are we ever going to be able to build a golf course this cheaply again?’ So we began building the course.”

The former hay fields, most of which had been in the family for 100 years, occupy stunning headland – with the look, feel, sound, and soil of true linksland – along the shore about a 30-minute drive west of Reykjavik. The clubhouse is modest but modern and sleek, with large windows looking out toward the sea and onto the rocky outcroppings that define many of the holes. The air inside the cozy space is redolent with the aroma of homemade soup, simmering in a pot for golfers making the turn or ending their round. A delicious bowl of soup with some crusty bread seated in the clubhouse seems far more civilized than scarfing down a hotdog in the golf cart as you race to the 10th tee. But I digress.

10:00 p.m. seems like a reasonable time to tee off when the sun is still high in the southwestern sky – in fact, from the elevated westward-facing first tee, the solstice sun is fairly blinding. Although not yet complete, Brautarholt has already been nominated to the Top-100 in the World list by Golfscape website, and 40th among Scandinavian courses by Golf Digest. All comments I’ve read about it online say, “Bring a lot of balls!” and I have brought a new dozen with me; there will be only two survivors.

From the back tees, the 2012 Edvinn Roald and Michael Kelly design plays 2,674 yards for 9 holes, 5,348 for 18, and 3,424 for 12, to a par 70. The total yardage, at present, doesn’t seem overwhelming, but between the ocean winds and heavy maritime air, cool temperatures, copious expanses of knee-high fescue, and wildly shaped greens that often drop off into the sea, there is plenty of challenge here. This is all especially true for all first-time international visitors; it’d take a good half-dozen rounds to figure out the optimal angles and landing areas, not to mention the club selections.

That final task, club selection, is especially tricky if you’re using one of the many sets of rental clubs at Brautarholt, all of which were top quality (Callaway, PING, TaylorMade, etc.). Still, you’re never quite sure how far strange clubs will go, and distances are tough to judge against backdrops of water and mountains.

The 437-yard par-5 1st hole is a perfect example. The hole plays from an elevated tee down to a fairway the angles to the left, with the ocean on the right and a marshy pond on the left and cross-bunkers just beyond the pond. Now, the ocean on the right is out of play, but it’s hard to judge this, and my tee shot ended up too far left, catching the pond. The second shot is to a blind green up above the fairway, with a rock outcropping on the left and a cliff on the right. After playing it once, you realize to favor the left – a lot – because everything funnels left to right once you get up to the green, and if you aim left but push it, you might miss the ocean. 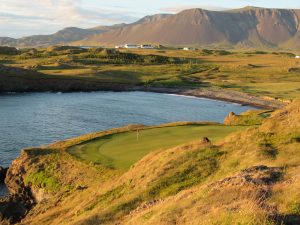 First green, from the cliffside above, on the way up to the 2nd Hole

From the first green it’s quite a hike further up the cliff to the tee of the 125-yard 2nd. But players are rewarded generously upon arrival. From the elevated tee on a clear day (or clear middle of the night, during summer solstice), you can see off in the distance the dormant volcano Snæfellsjökull, which appeared in the Jules Verne novel “Journey to the Center of the Earth” as the passage into the center of the earth. 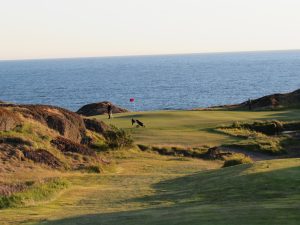 The green at the 125-yard 2nd Hole features a prominent hump in its middle, and a severe drop-off behind

After you’ve been sufficiently impressed by the view, you tee off with a wedge to a green in whose middle lies a rather imposing hump. “There was a huge boulder there. Michael Kelly decided to leave it. He’s a proponent of laying the golf course on the land and using the natural hazards.” If your tee shot finds the opposite side of the pin location, traversing the turfed-over boulder makes a three-putt a distinct possibility. If the pin is in the back, and you go long, you might find your ball in shin-high fescue. (It’ll be there, but you might not find it.)

The 223-yard, par-3 5th is a left-to-right cape hole that dares you to challenge a small bay and rocky beach with your tee shot—a challenge almost worthy of its own Icelandic saga. The prevailing wind balloons shots, and the green is partially encircled by rocky shoreline. I happened to land on the beach, from which I knocked a recovery sand wedge to 12 feet and sunk the putt for one of my favorite all-time scrambling pars. 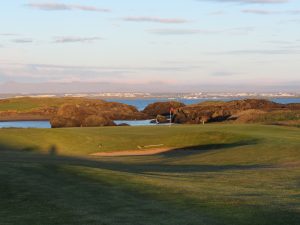 The green of the 223-yard, par-3 5th Hole at Brautarholt Golf Course delivers a gorgeous, rocky view of Reykjavik across the bay.

The 359-yard 7th is brutal. It plays back up away form the ocean to a snaking sliver of fairway that angles awkwardly away from the tees. On either side lurks water and knee-high grass. To top everything off, there’s a ditch bifurcating the fairway pretty much exactly where you hope to land your drive. Things don’t get any easier on the green, which is sloped severely uphill, and if you don’t get your ball back to the top level, it’ll come back to your feet.

“Michael Kelly believes every green should be special,” says Gunnar with classic Icelandic stoicism as we both wait to see of our balls are actually going to stay up on the green.

The 491-yard par-5 9th plays from an elevated tee down to a fairway that is only partially visible from the longer tees. Favor the right side here, as the fairway cants to the left toward high grass and a stream. There is a pot bunker in the middle of the fairway, though, where even well-positioned drives can find themselves. Approaches to the green must carry a deep swale fronting the putting surface. 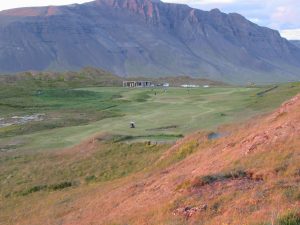 The tee shot on the par-5 closer must navigate fescue right, more fescue and water left, and a pot bunker in the middle. Aim right side of the fairway off the elevated tees and hope for a favorable bounce.

Behind the tee of the 262-yard par-4 11th, you can see in the distance the location of the first Christian church in Iceland (there’s still a church on the spot, but the original, and several replacements, have long since burned down). Then off to the right a way, if you know where to look, you can see an old house on the former site of a temple to Thor. There were, according to Gunnar, epic battles between the keepers of these two houses of worship around, which served as the basis for one of the Icelandic sagas.

“This is elf land, according to folk history,” says Gunnar, as I realize how many balls I’ve lost in just 12 holes. “Perhaps elves took some of them?” Gunnar wants to put up a sign that tells golfers to behave or the elves will get them. It used to work on Icelandic children to keep them away from dangerous places. And who knows, supposedly you can meet elves at midnight on the summer and winter solstices. 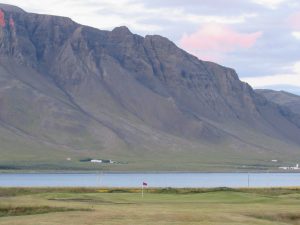 10th green at Brautarholt, about 12:45 a.m. The sun is behind that mountain, but visibility is still just fine on the solstice.

I saw no elves, but experienced perhaps the pinnacle of unique golf experiences at Brautarholt Golf Course this solstice. We concluded our round (and I played a couple more holes because I didn’t want to leave) close to 2:00 a.m., and even though the sun was low behind a distant mountain, there was plenty of light. The word “magical” came to mind again and again. Indeed, if the entire cast of “Game of Thrones” showed up in full costume to play Brautarholt, they would fit right in. 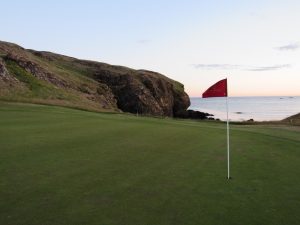 I took another crack at the 1st hole, but still bogeyed. On the plus side, I captured this nice view of the flag and sea at 2:00 a.m.

Midnight golf packages at Brautarholt run about $200 total, including rental clubs and transportation to and from any hotel in Reykjavik. Even if you’re not lucky enough to be in Iceland during summer solstice, any trip to Iceland between May and November should include a round of golf here. The views of the sea, of Reykjavik itself across the bay, and the surrounding mountains are imminently memorable. 12-hole fees are around $70, 18-holes run about $85. Both pull carts and golf cars, along with rental clubs, are available.

“I can check ‘midnight golf in Iceland’ off my bucket list,” says the woman from Ontario as we load into the van to head back into town. “This was perfect.”

Magically perfect? Perfectly magical? Either one works just fine, for us and the elves. 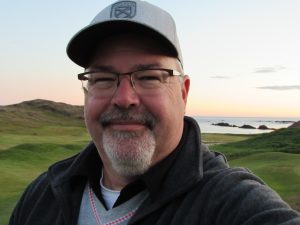 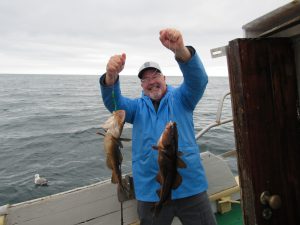 If you find yourself in Iceland during the summer and want to do something besides play golf, I recommend Happy Tours for some excellent cod fishing (which they cook up on the boat for you–delicious!).